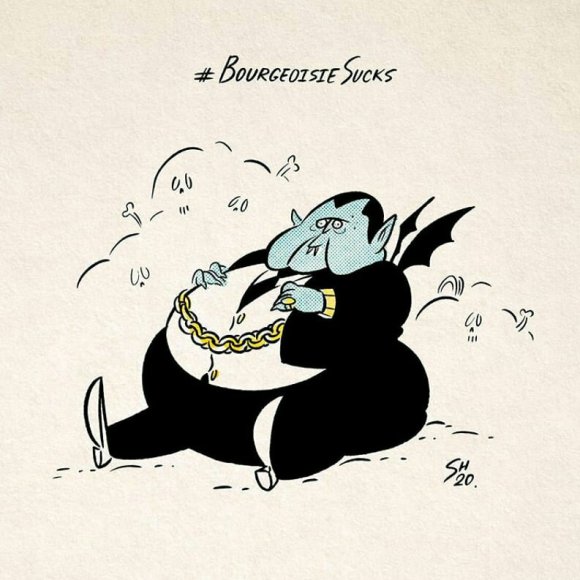 The bourgeoisie does indeed suck but they are not the only corpulent vampyres in this (all too) human game of parasitic symbiosis; every political system has them – they just tend to wear different masks. Underneath, they are all the same: bloated, selfish, cruel.

Which bourgeoisie? The middle class, the capitalist class, the class of intransigent ideologues who, having raised their rote-learned pitchforks and torches, proceed to destroy every single last concept or person that stands against them and there, finding themselves without a “class” against and through which to reflexively define themselves, rapidly hollow and collapse into their own stratified turbulence and class-based (!) system of confrontation and ludicrous adversarialism.

Class is merely that difference through which the self-propagating compression waves of civilisation pass, a transmission medium and complex hyper-object arising at a particular historical moment; instances and manifestations as the expression of a living enigma of human psychological insecurity.

The worst class is the class that asserts the transparent self-evidence and historical necessity of class. They create (by definition) their own antagonist and fail to understand that they depend on their Object no less than the Ideologues, the Plutocrats and the Kleptocrats depend on theirs.

Exploitation is not merely material. It can be conceptual as well. The most tragic class exploitation of all is quite probably that through which a whole ideological system creates by inversion the object of it’s own hatred as a necessary condition for the foundations of its self-definition. In this way, they come to unwittingly exploit themselves and this is the inadvertent enigma of all adversarial politics and political systems.

This is not even a form of purposeful ideological cannibalism or useful recycling of ideas or system artefacts. It is the structure of a self-extinguishing, predatory narcissism that is unstable and destined for catastrophic collapse. We consume that which we symbiotically depend upon to continue to exist.

Have a nice day.